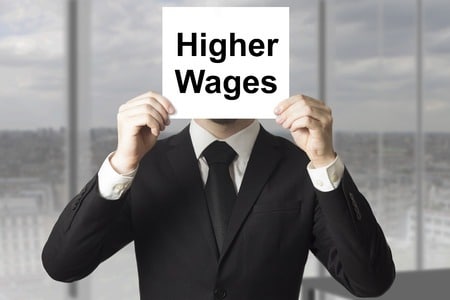 Return with us now to those thrilling days of yesteryear, when people sought employment with big firms and stayed with those firms for a career. Then it was believed, and probably rightly so, that salaries and benefits were a big advantage for employment with major companies.

It appears that this belief has been relegated to the dustbin of history, probably forever in our view, according to an article from the Wharton School of Business from last November. Here’s the lead paragraph from this article:

“A job at a large company used to bring with it several advantages, not the least of which was generally higher pay than similar employees working at a smaller firm. Called the firm-size wage effect, the phenomenon has been extensively studied by economists and sociologists as it has eroded in the last three decades and affected everything from employer-employee relationships to income inequality.”

This article reports on the findings from a study that concluded, “workers in the middle and bottom of the wage scale felt the biggest negative effects from the degradation of the link between firm size and wages. Those at the top of the wage scale, however, experienced no loss in the large-firm wage premium.”

Over the time frame studied, 1989-2014, the conclusions show a 20% contribution to overall wage inequality. “Working for a big, stable company would have typically been seen as a fantastic career decision—there’s opportunity for advancement and good wages. That no longer seems to be the case.”

“Firms with 500 or more workers once paid wages that were 30% to 50% higher than those firms with fewer than 25 workers. Large companies paid premiums to attract higher-quality workers and the wage floor was likely driven up by organized labor or, …attempts to sweeten the pot enough that employees would see no need to organize.

This all began to change in the 1980’s but “took off during the subsequent economic boom of the 1990’s. It was the same time that the outsourcing and offshoring of low-wage jobs started to take effect. … Many firms have outsourced low and mid-wage workers, so now they work for contracting companies and get paid a lot less.”

One particularly interesting factor noted in this study is the change in the relationship between employer and employee. “Pay, once linked to the job, became linked to the individual worker and did not increase in the same predetermined pattern. Frontline managers, for example, had more discretion on what to pay and who to hire, functions that once would have been part of the centralized hiring process common at large firms.”

Combining the relationship factor above, with globalization and technology, the study concludes, “rewards for working in a large firm have seemingly changed and they have changed more dramatically for lower and middle skilled workers.”

This report deals with a sea change in employee-employer relations over the past 30 or so years. Finding long term employment with a major company is probably much less common and perhaps much less desirable than decades ago. Then, almost no one worked at home, for example, and doctor house calls were still a recent memory for some.   We also have yet another factor in the income inequality issue—and this one would appear to have no simple corrective action. More food for thought indeed!

If you wish to examine this article in it’s entirety. These authors plan further studies on this important issue.