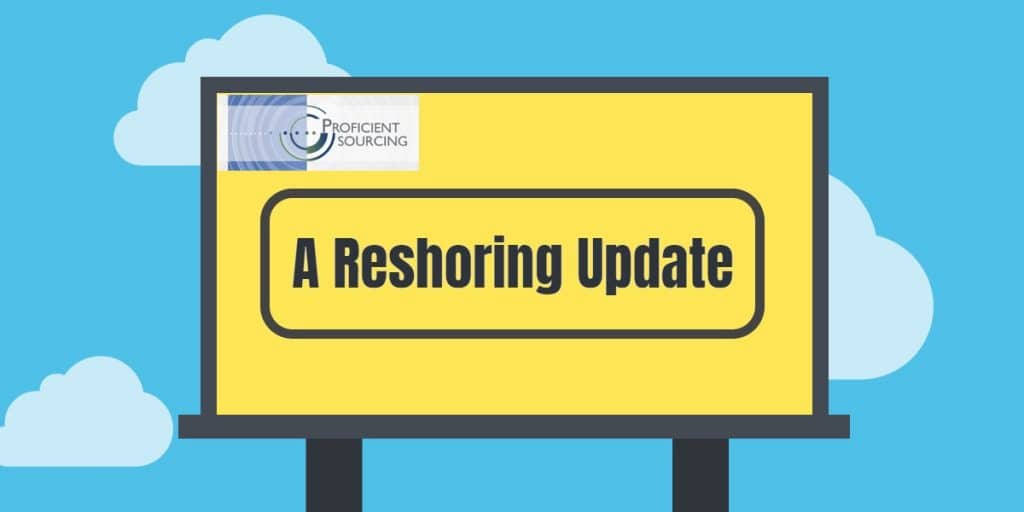 “According to the Reshoring Initiative..reshoring … .job announcements soared in 2017.  For the first 3 quarters of 2017, announcements were up 250 percent from 2016 YTD, representing a gain of nearly 180,000 manufacturing jobs.”  This was the headline of a recent article; you can find the link below.

By in large, the trend to offshore manufacturing occurred because of the great gap in wage costs between the US and especially China.  This despite the principle that locating manufacturing near customers has many benefits and localizing suppliers creates great innovation opportunities.  We have reported on this several times previously. A recent example.

In any case, it does appear the offshoring trend has been arrested and at least some jobs are being reshored.   And as OEM manufacturing returns to the US, the value of localizing suppliers increases as well.  Proficient Sourcing’s mission is to assist OEM manufacturers find good suppliers for parts and assemblies, and what we might be able to do for you can be found here.

Many major manufacturing OEM’s have each brought back over 2000 jobs in the past 10 years:  Mahindra, GM, Boeing, Toyota, Volkswagen, Volvo, Ford, Foxconn, Mercedes-Benz, GE, Caterpiller, Polaris, and Intel.  Quite a list, and in multiple industries.  This should be good job news indeed!

“In particular, the labor cost differential between China and the US has narrowed significantly over the past 5 years.  …. Increased shipping costs further erode the bottom line.”

“The US corporate tax climate is more favorable now than it has been in decades, thanks to the Trump administration’s Tax Cuts and Jobs Act, which cuts the corporate tax rate from 35% to 21%, the lowest rate since 1939.  The legislation also eliminates the corporate alternative minimum tax (AMT), which prohibited companies from deducting R%D costs, or capital investments in low-income neighborhoods.  When coupled with competitive state tax credits and incentives, the new tax climate makes reshoring look even more attractive.

Boston Consulting has estimated “that Walmart’s 10-year manufacturing initiative will create 250,000 direct manufacturing jobs and about 750,000 support and service jobs to the manufacturing sector.”  The Walmart 10-year plan appears to reverse a long reputation for using cheap foreign goods and concentrating on “made in the USA”.  We wish them well!

So it would appear that the US is enjoying success with reshoring manufacturing.  And we at Proficient Sourcing stand ready to assist with any localized manufacturing efforts you might need.  Just give us a call at (513) 489-5252!

The complete article can be found here.