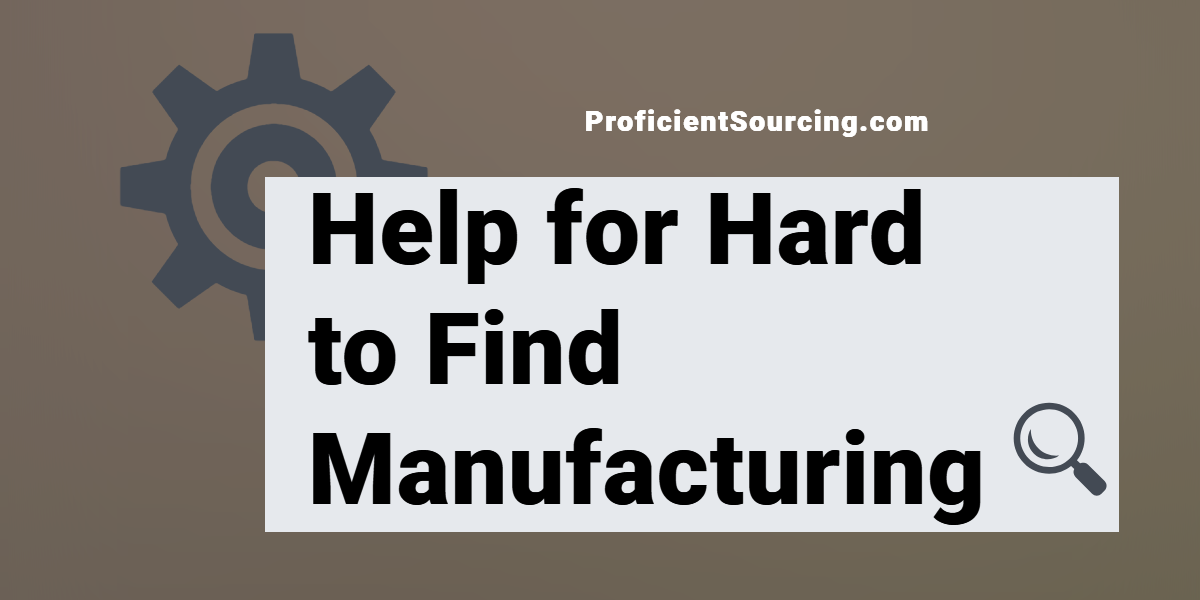 In some cases Proficient Sourcing becomes involved with sourcing the difficult.  We have had success doing just that.

Most of the sourcing we have done is machining and fabrication work, along with injection molding and foundry work.  However, in some cases we are seeking a supplier for something unusual.  That might be exotic materials or extreme sizes or hard to find processing equipment.  Here are some examples of such sourcing work, all of which resulted in the rapid discovery of at least one suitable supplier.

Our point here is we have very good access to many resources to find companies that do the unusual or difficult and lots of experience doing just that.  If such a situation occurs in your world, we hope you will give us a chance to make your life just a little easier.

One company contacted us to find a supplier that could take their proprietary material and convert it into a special format, then return it within a very short time.  The company was seeking someone within 100 miles and had had no success whatsoever.  They had even asked the equipment manufacturers for help without finding a suitable answer.  Our sources located a company with the capability to do the work, but required a small amount for equipment modifications.  Within a few days we had found what the company needed.

We have several examples of companies looking for better suppliers for ongoing parts manufacturing.  One OEM was looking for a competitive source for a mixing tank manufacturer, which involved 3/8’ stainless plate rolling.  At the time the company was using a source about 500 miles away, and that source was subcontracting the rolling.  Within 48 hours we found 2 excellent closer sources, both of which could do the job complete.  One even made frequent deliveries into the customer’s area, which significantly reduced one cost of their present method.

A second OEM was seeking a specialized wire form for an ongoing application and also had a supplier about 500 miles away they were considering.  Fortunately, we knew of a local company who’s specialty was exactly this sort of work about 35 miles away, and that relationship is now going very well after almost a year.

Perhaps the most unusual so far is the engineering company that contacted us to find a machinery builder.  The application was a unique anchor chain testing device for some government agency.  We suggested that surely the US Navy would have such a device, but that turned out not to be the case.  And so within a few days we found a local shop that had just the skills and facility to build such a device.  Our company won the bid, and built the machine, which was delivered on time and within budget!

Finally, a local division of a global conglomerate needed a specialized and highly precise formed plastic part for their equipment.  In addition to an unusual material, the tolerance requirements were also difficult.  The current supplier was having quality issues and wanted out of the business.  To make matters worse, the quantities of the several parts were from 50 to 300 per year.

In this case we searched several avenues without success for a week or so before we found a local company with just the sort of facilities that suited this work nicely.  This project was completely successful and has operated flawlessly for about 3 years.

The takeaway here, we hope, is that if and when you have something difficult to find, Proficient Sourcing can probably help—FAST!  This is what we do, and we are ready when you are.

Reach Out to Me Directly for Questions

This site uses Akismet to reduce spam. Learn how your comment data is processed.