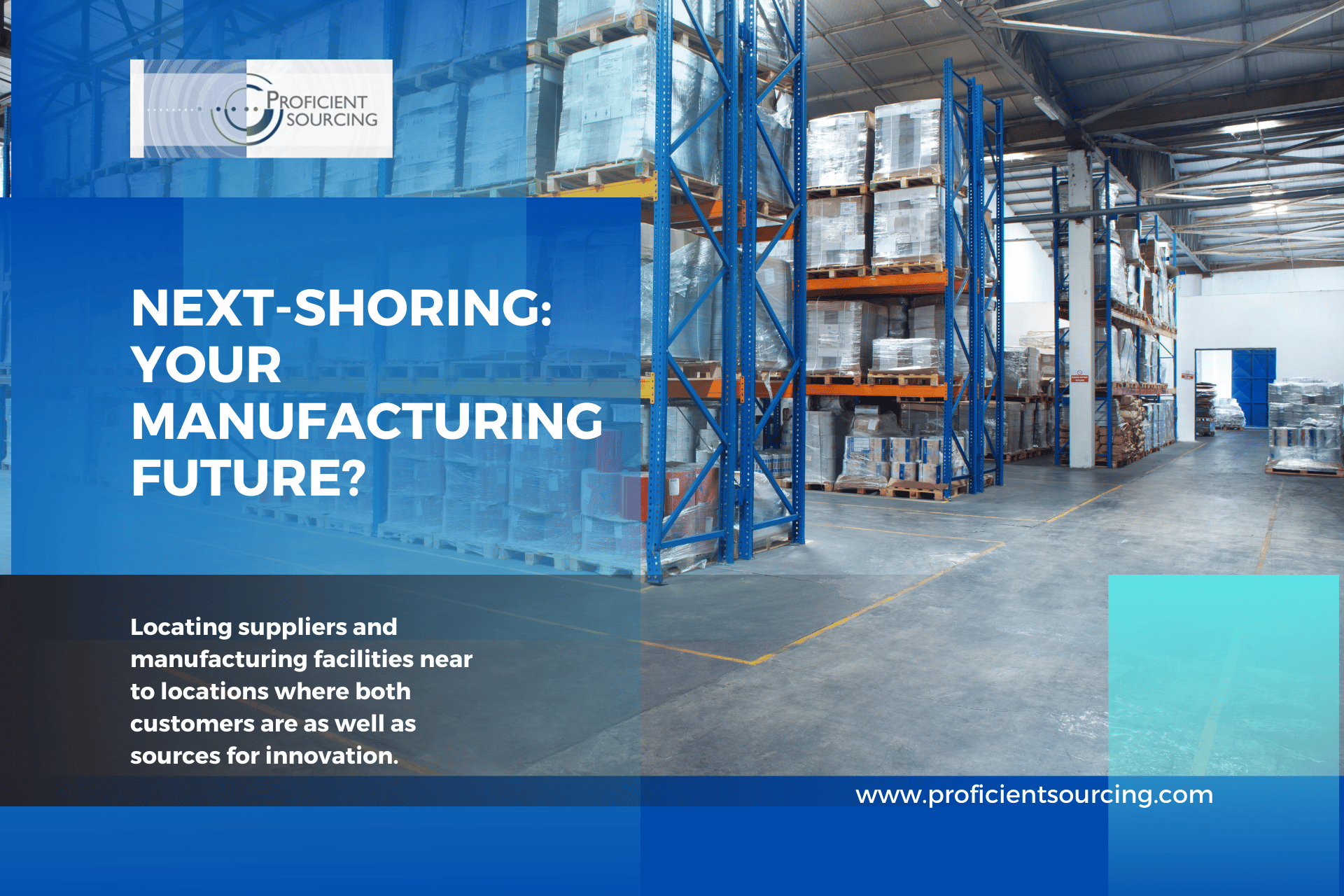 The rapid pace of change in a few key areas has reshaped manufacturing strategy. New developments have led to “next-shoring”, which means locating suppliers and manufacturing facilities near to locations where both customers are as well as sources for innovation. Innovation, according to most sources, occurs most easily when manufacturing is nearby. And this became one shortcoming of offshoring.

In the recent past, locating manufacturing in low labor cost countries was a high priority. Recently, rising wages in places like China have fueled considerable reshoring efforts. According to a fascinating McKinsey Quarterly article, strategists now need to give next-shoring serious consideration due to great progress in a few key elements.

These key elements favoring next-shoring as a strategy begin with serving local demand. According to McKinsey, “more than 2/3 of global manufacturing activity takes place in industries that tend to locate close to demand. … In the US, about 85% of the industrial rebound…can be explained just by output growth in automobiles, machinery, and oil and gas—along with the linkages between these sectors and locally oriented suppliers of fabricated metals, rubber, and plastics. The automotive, machinery, and oil and gas industries consume nearly 80% of US metals output.”1 We note the current rush to locate automobile plants in China, now the largest automotive market! How times have changed.

So rather than focusing on relative labor costs as the primary determining element of a location decision, it would appear that where customers are is gaining strength. Again, per McKenzie: “The emerging markets’ share of global demand is steadily climbing, from roughly 40% in 2008 to an expected 66% by 2025.”. This means product variety must expand to allow for local tastes and needs, making manufacturing from a single or limited number of sites more problematic. This would lead to an expectation of companies locating manufacturing in emerging markets at an increasing pace.

Many have noted the US advantage in energy costs, given the astounding gains via fracking for oil and gas generation. Even with the oil and gas sector contraction from the oil price decline, there are many industries, such as chemicals and fertilizer, for example, that plan new US capacity to take advantage of these new US resources. And they are not alone. However, other advancements in overall energy could mean significant changes globally.

This could mean more emphasis on locating suppliers in the US, if this is where your customers are! That would be good news for Proficient Sourcing, since we welcome OEM’s seeking excellent suppliers for producing their manufactured parts and assemblies. HERE is a listing of the variety of manufacturing capabilities we can provide with no obligation.

Another factor favoring emerging market locations might be the growing availability and use of renewables where power grids are substandard (or not yet in place). Even micro nuclear plants have been considered in such situations. Energy developments such as these could lead to locating facilities in new market areas currently considered too remote at the present time.

As wages rise in previously low-wage countries, the potential for automated manufacturing increases. Industrial robotics can handle a growing list of functions, and as that capability increases the significance of relative wages shrinks. Indeed, the future seems to suggest the plant of the future has robots working side-by-side with humans and being “trained” by factory operators rather than teams of expensive engineers or programmers. Speed to market and product quality is always desirable; this sounds like another step along that path. Finding qualified worker skills in emerging markets will always remain a challenge, and especially since sophisticated skills may be more necessary than ever before.