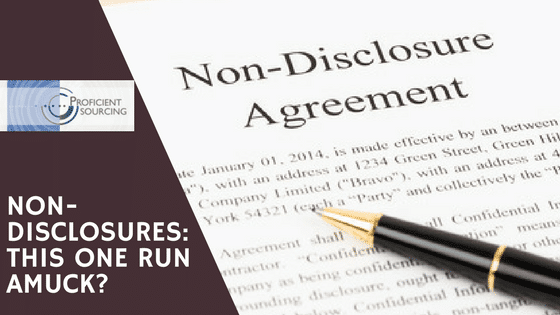 Proficient Sourcing provides manufacturing candidates of distinction for OEM’s seeking different suppliers. Very often non-disclosures are the first thing that happens. Once that step is completed by our signing the agreement, then the company can disclose what it is that’s needed and we can proceed to look for suitable candidates. During our work we’ll often require candidates to also sign the NDA before we disclose the nature of what is to be supplied.

Generally these NDA’s require that proprietary information not be shared beyond the requirements of the project in question. But our most recent case went far beyond that, and we would be most appreciative for your comments on our blog. In particular, is this company being unreasonable or are we missing something?

A new and previously unknown company contacted Proficient Sourcing about a potential new product. For this new product they were interested in finding new suppliers for their new development. But what was to be supplied was not revealed. All the information we had was their website, which gave us some idea what their general business was, but there was no information about what might be required by a new supplier.

The first step was for us to sign a non-disclosure agreement, which we signed. Once the company’s requirements are disclosed we then will begin the selection of the very best supplier we can recommend. Also, our procedure in such matters is to have our candidates sign the non-disclosure before they can access whatever information is passed to us, and here is where the problem occurs.

The issue was a specific paragraph in this non-disclosure, that read as follows:

“This specifically declares that Contractor [Proficient Sourcing] is not entitled to sell products or services directly, indirectly or through a third party, to any customers of [the potential customer—hereafter called “Acme Anvil”] regardless of how the identity is revealed to Contractor”

Proficient Sourcing’s network is generally a group of high performing “job shops”. These companies usually do not have products of their own, but make things for other companies’ products. Sometimes the customers of our suppliers are themselves making something as a component of yet another company. In many cases the ultimate consumer of whatever is made by our suppliers are completely unknown; perhaps even unknowable by virtue of the chain of “tiered” suppliers involved.

So our first issue with this NDA is how in the world we would ever know who the customers of Acme Anvil are, or might be? Second, we already might be making something for one or more of their customers, or might in the future.

Consider that, for example, that one machine shop we recommend to someone makes a part for a product with very wide distribution. Some piece of machinery, for example, that’s widely used. If a customer of Acme Anvil also uses this machinery containing a part made by our supplier and our supplier also makes something else for Acme Anvil, is this a violation of the NDA?