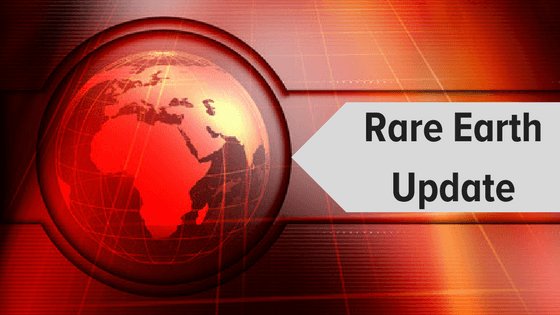 We’ve found frequent news about rare earth metals.  Last year there was considerable strategic concern, and we are relieved to learn this is not the only opinion.

From the May 05, 2015 tech blog Gizmodo comes this:  “Rare earth elements are hard-to-find metals that we need for batteries, solar cells and electronics. These days, they’re mostly mined and processed in China. But it wasn’t always so. The history of rare earth elements is surprising, and some of it even takes place in America’s backyard. In fact, there is still a rare earth mine in the US.

“It’s located on the eastern edge of California and for a time, it supplied most of the metals used in the world’s electronics. And though it was shuttered in the 1990s, it’s ramping up production again. And by doing so, it could radically change the supply chain behind consumer electronics”.

This blog report was a bit outdated by the time it went to press.  In 2015 there was concern over the decline of Molycorp’s Mountain Pass mine, where rare earths are found in concentrations that justify mining.  In August, 2015, the mine was closed.

This increased strategic concerns, since China was reported to control some 90% of the world’s supply of these valuable materials.  This was the thrust of CBS’s 60 Minutes report.  Around this time there were many articles expressing this same strategic concern.

However, there’s a more optimistic view, and the  High Country News 6/16/15 edition had a lengthy report “Why Rare Earth Mining in the West is a Bust”:

“In March, 2015, CBS’s 60 Minutes had a segment “Modern Life’s Devices Under China’s Grip?”   “One country,” Lesley Stahl warned, “has a virtual monopoly — roughly 90 percent — of the mining, refining and processing of rare earths: China.” And: “The U.S. developed this technology, but China bought most of it right out from under us.” And, most gravely: “We are dependent on China for our weaponry.” The segment was good television. [Here’s the You tube video link:  https://www.youtube.com/watch?v=N1HiX0HiAuo ]

‘It was good politics — Alaska Republican Sen. Lisa Murkowski cited it the next morning in a call for more federal support of mining. But it was not good journalism”.

‘The new Mountain Pass opened in 2012… By 2014, America’s only rare-earth mine was producing 4,700 tons a year.  But the mining industry operates without any particular loyalties. Australia opened the Mount Weld rare-earth mine in 2011; at full capacity, it may add 22,000 tons of annual supply to the roughly 150,000 tons of annual demand. A joint partnership between Japan and Vietnam began producing small amounts in 2012; it may eventually produce 10,000 tons per year. Worldwide, nearly 60 rare-earth deposits in 16 countries are currently in advanced development. Far from controlling global supply, China no longer even controls its own: It’s estimated that Chinese wildcatters add 40,000 tons of black-market material each year to the 95,000 tons the country officially produces. From a near-monopoly of 97 percent in the late 2000s, China’s market share has fallen to 86 percent, and seems destined to fall further. More importantly, all the new global production has caused rare-earth prices to collapse from their 2011 peak.

“Modern life, or at least its smooth functioning, does depend on rare-earth elements. But it’s absurd to single them out as uniquely vital to the U.S. economy, let alone as a unique vulnerability. American manufacturers in 2014 imported just $210 million worth of rare earths, or about 12,000 tons, just 8 percent of global production. (China’s share of those imports was 75 percent, not 90-plus.) No American manufacturer or defense contractor — not even the Pentagon itself — has ever indicated supply problems. Moreover, more than half of rare earths are simply used as catalysts in petroleum refining; most of the rest go into cars, digital devices and lighting. And the rest of the world is happy to sell America as much oil, autos and gadgetry as it wants”

So perhaps this is not the procurement nightmare we originally thought, and let’s all hope it does not become a problem in the future.