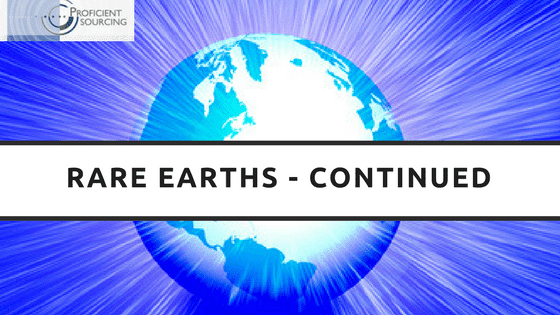 If your supply chain includes items involving rare earths, a recent executive order signed by president Trump would be worthy of your attention.

According to a Washington Post article from December 20, 2017, “President Trump signed an executive order….instructing his deputies to devise a strategy to reduce the nation’s reliance on critical minerals that are largely imported and used to produce everything from smartphones to weaponry”.  If this means the government is going to take a serious look at the rare earth situation, we are all in.

Lasers, sophisticated optics, computers, aircraft, smart devices and many more items depend upon the unique characteristics of certain rare earth minerals.  But because almost all the world’s supply of these elements comes from China, you may wish to keep an eye on rare earth developments.  From a national security standpoint, consider this, from the Washington Post article:  “USGS (US Geologic Survey) experts prepared an analysis … [to show] which critical minerals would be components of a Navy SEAL’s combat equipment.  It concluded that the outfit would include 5 critical mineral elements in night-vision goggles, 123 for communications gear and a GPS System and 3 for the M4 rifle.  So to that extent the SEALs must rely on China?  Does this make sense?

We discovered the rare earth issue in 2015 and wrote a couple of blog articles.  Click here to review:  2015 Rare Earth Blog

Decades ago a California mine, Mountain Pass, was developed to  provide rare earths.  For most of that time the US was the principal global source of these elements.  The US Geologic Survey recently published a professional paper concerning the rare earths among the “critical mineral resources”. This paper outlines the individual rare earths as well as their primary uses.

All this has become a national security issue.  In 2015 60 Minutes had a report on the subject you might find instructive. Since that report things have not gotten any better.

The Mountain Pass mine was the only rare earths mine operating in the US but declining mineral prices resulted in it filing for chapter 11 bankruptcy in 2015 (shortly after the 60 Minutes report noted financial problems).  In the summer of last year (2017) a Chinese-led consortium bought Mountain Pass, although there is some regulatory review necessary to complete the sale.  Here’s a link that gives a little history of the cause of the bankruptcy and recent sale.

China, which already controls about 90% of the world’s supply of rare earths, will also own the US’s premier facility for these valuable materials.  Apparently there is no shortage of these elements in the world; rather it’s a question of extraction economics as well as environmental concerns, which shut Mountain Pass down in the late 90’s and gave China an important boost.  Absent the US environmental regulations as well as cheap labor, China leaped into the leadership for rare earths, a position it has maintained ever since.

All this should give us pause.  As we mentioned above, you probably have something in your manufacturing or supply chain that depends upon some rare earth element, which means you are now almost entirely dependent upon China.

Given the significance of these materials, it would seem high time for the federal government to take a serious look at our supply sources.  As a procurement professional, wouldn’t you agree?