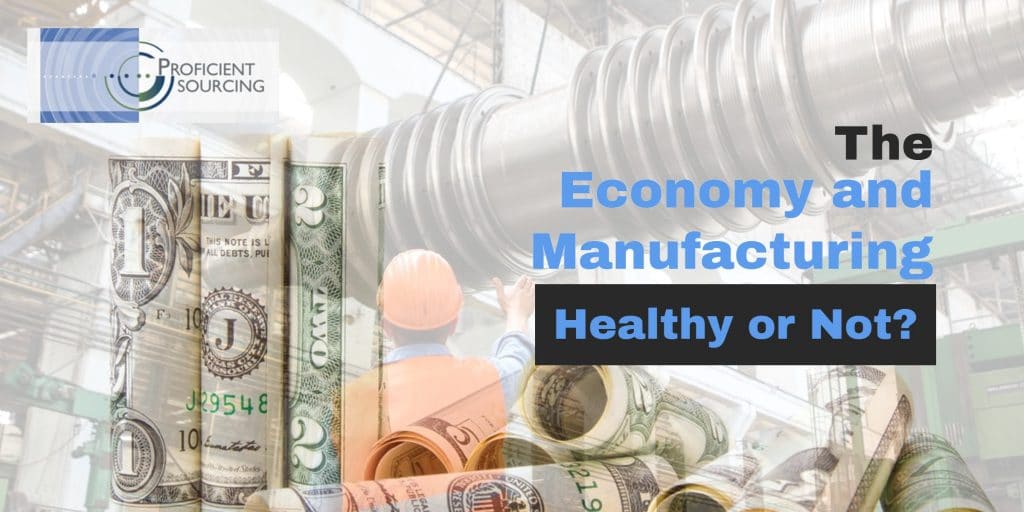 Over the last few months we’ve heard concerns about the economy.  Bottom line seems to be declining a bit, but still strong.  Manufacturing, however, may be more concerning.  So what’s the story?  On 11/1 the jobs report was apparently better than anticipated, so we appear to be Ok overall.  Yet, manufacturing is our interest at Proficieint Sourcing and things seem to be slowing just a bit.

We found a couple of reports that provide some evidence for this bottom line conclusion.   Every now and then the Institute for Supply Management reports an index—the Purchasing Managers’ Index, which seems to be a widely respected indicator of economic health.  As an aside, if you want a really good economic forecast, check out the 2nd article below.  You’ll need to contact Barnes Dennig if you’re not on their list, but it would be worthwhile to do so and attend the 11/6 event.

So back to our news; and first, what is the PMI?  Here’s one definition along with amplifying information from  www.thebalance.com:

“The purchasing managers’ index (PMI) is an economic indicator that surveys purchasing managers at businesses that make up a given sector. The most common PMI surveys are the manufacturing PMI and the services PMI, which are released for the United States and many other developed countries around the world….Investors use PMI surveys as leading indicators of economic health, given their insight into sales, employment, inventory, and pricing. After all, manufacturing sector purchases tend to react to consumer demand and are often the first visible sign of a slowdown. They are also among the most highly watched economic indicators since they are often the first major survey released each month”.

Here’s the latest ISM report:  “Economic activity in the manufacturing sector contracted in September, and the overall economy grew for the 125th consecutive month, say the nation’s supply executives in the latest Manufacturing ISM® Report On Business®….Manufacturing contracted in September, as the PMI® registered 47.8 percent, a decrease of 1.3 percentage points from the August reading of 49.1 percent. This is the lowest reading since June 2009, the last month of the Great Recession, when the index registered 46.3 percent. “The PMI® contracted for the second straight month. The contraction continues six straight months of softening in manufacturing.

Justin Lahart wrote a Wall Street Journal article dated 10/1/19 that puts some context to these data:

“That isn’t to say that the economy is currently on the brink of recession. The manufacturing index is based on a survey of purchasing managers and can be influenced by fleeting changes in sentiment that can later be reversed. Some of the real problems manufacturers face, such as the effects of the GM strike throughout the car maker’s supply chain, will likely prove temporary.

But that the manufacturing index deteriorated in a month when trade tensions weren’t dominating headlines like earlier in the summer, and when the stock market staged a big recovery, stands out. Indeed, most economists thought the index would show a slight improvement in September. That it got worse instead counts as a cause for alarm”.

We are most interested in the manufacturing situation, so apparently we need to be paying close attention and taking appropriate action just in case.