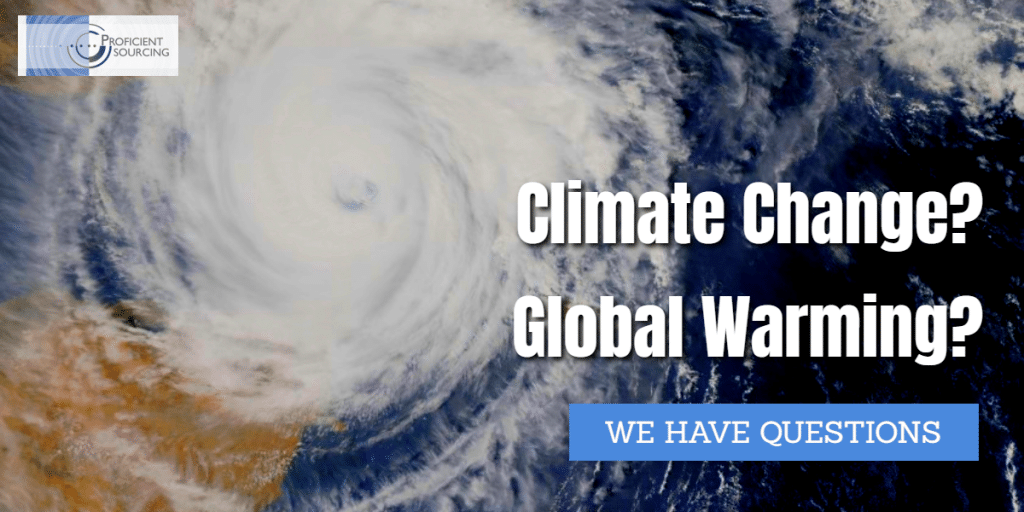 If you are confused by all the projections and claims from the climate changers, welcome to the club.  We read a few things recently, and so here’s a newsletter far from the beaten path of manufacturing OEM suppliers.

For more than 20 years we’ve been bombarded with alarming predictions from all manner of famous and not-so-famous people, including prominent politicians from Al Gore to AOC.  The basic message has something to do with elevated greenhouse gas levels (especially CO2) in the atmosphere, increasing at an alarming rate, and with dangerous implications for us humans in the near and not-so-near future.

In particular, we’ve all heard dire predictions of glaciers melting, sea levels rising, temperatures rising, coastal areas and polar bears threatened, and a number of other pessimistic forecasts.  All this is documented in vehicles from the infamous “hockey stick” to An Inconvenient Truth to The Green New Deal.  Some even forecast the end of life in just a few years.  Now there’s to be a protest movement of students, perhaps numbering in the millions.

Have any of these dire predictions actually come to pass?  One wonders, since we cannot think of any.  From Paul Ehrlich to Al Gore, the success of disaster predictions is 0%–at least so far, right?  Yet we continue to get more of the same.

One of the most common recommended action steps has been a drastic curtailment of fossil fuels, and we’ve heard that some states have already banned fracking.  This is particularly ironic since we are finally at the dawn of energy independence for the first time in decades, due primarily to the success of fracking.  But we digress.

Recently we have come across some questions that seem reasonable, yet are not pursued.  And here are just a few we think ought to enter the conversation before drastic action is taken.

The first is just what is the relationship between CO2 levels and the earth’s surface temperature.  One source suggests this is not clear, and so forecasts based on some effect on temperature due to CO2 levels needs to be challenged.

Then if some amount of CO2 is eliminated, what is the forecasted temperature effect?  Seems like this should be clarified before some fundamental energy change is implemented.  We hear that we MUST reduce/eliminate fossil fuel use, but if we do, what is the result?  This would be especially useful to know if the United States made a major CO2 reduction step, what would be the expected SPECIFIC benefit?

Why is nuclear energy ignored in all this?  As an aside, we read it takes some 10-13 years to complete a nuclear plant.  Yet, if one is wrapped with a navy aircraft carrier it only takes some 3 years.  Does this make any sense?

One climate professor noted of the past 10 thousand year periods, 9 have been hotter then the current one. We should have taken notes on this, but were driving at the time.  Surely this is easily verified, so if anyone has access to such information, please let us know.

Finally, we heard the polar bear population is doing just fine, thank you very much.

So we’re confused.  Is there a problem or not?  And if there is, just what can be done that makes sense?  Inquiring minds want to know.