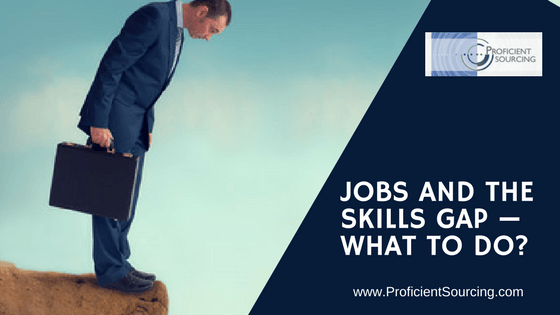 There’s been a great deal of news about jobs, jobs, jobs lately.   “In June, the Business Roundtable reported half of its members were having difficulty finding applicants with employability skills, like math, the ability to read technical manuals, and complex problem-solving”.

Are you concerned about this skills gap?   If so, what to do?

“In an article in the Harvard Business Review, Andy Smarick discussed the disruption of computers in numerous industries over the last two decades:  new technologies frequently require specific new skills that schools don’t teach…and that labor markets don’t supply”.  Further, “…there is a consensus that a combination of factors—too many people out of work, jobs moving abroad, automation, new types of jobs emerging, retiring baby boomers—makes it essential that the nation take seriously career-focused education”.  These quotes are from “The Jobs Problem” article in the Weekly Standard.

The article further points out the extent to which various federal jobs programs have been formed since the New Deal.  “The 1962 Manpower Development and Training Act…was designed to train “workers unemployed because of automation and technological change.  President Kennedy lauded the law for educating those “denied employment because they do not possess the skills required by our constantly changing economy”.  Does this sound familiar?

Then “in 1972 …Nixon signed the Comprehensive Employment and Training Act (CETA) into law, saying it would “help individuals adjust productively to changing economic conditions.  CETA was then replaced by the Job Training Partnership Act of 1982, aimed by the Reagan administration at helping the young and unskilled enter the workforce”.

“Nixon believed CETA would tidy up the federal government’s sprawling approach to training and pass authority to the states.  His signing statement hailed the law for putting an end to the patchwork system of programs and cutting federal springs.  State and local governments, he promised, will be the decision makers. … in 1981 the New York Times noted CETA’s public service employment provisions had directed most of the funding to create federally subsided jobs…that grew in wild spurts.”   So it seems federal solutions leave much to be desired.

Yet we continue to hear politicians trumpet the value of apprenticeship programs and proposals seem to be increasing.  Is federal “help” a good idea?

This fascinating article notes that one “reason to reject the federalizing tendency is that the contemporary job-training challenge is screaming for nimble solutions.  Jobs demand varies widely by place.  “The challenge is helping a displaced worker acquire the specific skills demanded by a specific job market.  This requires knowledge of local labor demand and an agile ecosystem of training providers.  Bulky federal programs seldom have the responsiveness and flexibility to meet varied demand.  Indeed, a 2011 GAO report found that nine federal agencies were then administering 47 training programs, nearly all of which were required to track multiple national outcomes”.  The GAO also issues periodic reports concerned with overlap and duplication of various federal activities.

The article’s author writes for the American Enterprise Institute, so one could expect a healthy skepticism about federal government activities.  Thus, it should come as no surprise that the current focus on apprenticeships would be dimly viewed.  “We should be …skeptical of Washington’s current fascination with apprenticeships.   …  [They} are expensive and slow to take effect.  It’s not clear that they should be prioritized above boot camps, community college, or other nimbler approaches to our present problem.  But it is clear that a big Washington program would hog resources and create a host of ossifying federal rules”.

The article concludes with this:  “We’re in an era of deep frustration with Beltway cronyism, elites, and administrate-state bossiness, not to mention swirling social and economic change and federal budget deficits”.

So if this article is to be believed, beware when you hear about some federal jobs program.  Apparently results are few and costs are great.  And this means better alternatives do not see the light of day.

Here’s the link to this article.